European Brazilian (from her father)

Take care of her son

Run As You Are

Hana "Hatchin" Morenos is the daughter of Hiroshi Morenos and an unknown woman.

After Hana's biological mother died while she was still a baby, Hana was taken in with abusive foster parents who constantly degraded and exploited her until Michiko came to her rescue. Hana was hesitant to trust her at first, but they slowly start to form a deep bond and they end up becoming a surrogate family. She shares the same crossed feathers tattoo as Hiroshi and Michiko, located on her stomach.

Hana was born around two years after Hiroshi disappeared. She got her crossed feathers tattoo done shortly after birth although it is unknown who tattooed her or the reason for it. Hana's mother passed away while Hana was still an infant and she was taken in by the Belenbauza-Yamada family.

Hana's foster family were abusive, obnoxious people who only wanted Hana so that they could collect child support money. The family treated Hana as their slave and severly punished her over the smallest mistakes while they spoiled their biological children Maria and Gabriel. Hana suffered heavy emotional and physical torture through the years from her foster siblings, Gabriel Belenbauza Yamada and Maria Belenbauza Yamada, who subjugated her as a lesser being for not being a real member of the family and often forced her to do their own chores such as taking care of their pet cat Blanco, although the entire family always put up a façade as perfect and kind individuals in front of child services and neighbors as well as placing a single photo of Hana with her foster siblings in the living room so that visitors could believe Hana was truly considered part of the family. Her foster parents would often scare her into behaving by telling her about the horrible things children who don't have families endure and that she should be grateful for what she had as well as bribing her with hand-me-downs from Maria such as old magazines.

After Michiko escapes the prison, she travels to the town Hana lives in, robs a bank, and disguises herself so the police doesn't recognize her. She then tries to track down where exactly she is in the town. The day before she goes for Hana, she calls the family and warns them to have her ready for pick up by her mother. Knowing that Hana's mother was dead, Pedro suspects that it is someone who found out about his habit of raising children and collecting child support money, so he plans on stopping the abduction by murdering her with his shot gun. The next day he has his shot gun ready as the family eats breakfast. Hana is given only what looks like milk, while the rest have a wider range of food. She quietly drinks it and then notices the gun in the back, she is then very suspicious. Pedro then tells Joanna to hide Hana while he loads the shotgun.

At that moment, Michiko comes through the window on her bike, shattering the glass (It is uncertain if she bought the bike, but it is likely she stole it). She crashes on the table as the family is in shock. Pedro fires from the living room, but misses each time. Michiko notices Hana after Maria and asks her if she is Hana. She stays quiet, but as Hatchin looks at the woman she notices the tattoo. Michiko asks Hana if she wants to stay here and they end up leaving with police cars chasing them.

During their travels Hana (along with Michiko) meet various people, and by using clues to Hiroshi's whereabouts. Though the duo are not alone, as they even encountering the likes of Satoshi Batista (Hiroshi's childhood friend), and have became entangled in other's dilemma.

In the end Hana had spotted her father Hiroshi in episode 21, (though there was no dialogue between the two until episode 22). Unlike Michiko who embraces him, little Hana had no desire to have anything to do with him. Despite her protest to Michiko that she doesn't need someone like him in her life, she still leaves with him on a small plane, while tearfully looking at Michiko riding off (demanding the pilot to land the plane). Sometime later Hana watches Michiko escorted to jail on TV, while still living with Hiroshi gives her a pass to cross the border, promising to make up for lost time, though he ends up leaving (chasing after some woman, before long). Hana remains unaffected by this, stating that her feelings were never there in the first place.

It's unknown where Hana lived in-between Hiroshi's second absence and her adolescence.

In her late teens, Hana works an 11-hour shift in the kitchen at an eatery, and eventually meets someone. The two have a relationship that lasts 3 months before it was over. Hana ends up having a child as a result of this relationship. She nevertheless is a happy single mother, who spends her off days playing with her son (who she claims to take after "someone she knows"). She receives lots of letters and gifts of showy lingerie (presumably from Michiko) and Hana eventually realizes the gifts are from Michiko and is able to figure out her location though the addresses in the packages and a map. Hana travels to the spot. She eventually gets to a location in the middle of nowhere and spots a vehicle coming her way. It turns out to be Michiko, Hana asks "how far will we go this time?" and the two shared a hug.

Hiroshi Morenos is Hana's biological father. Upon running away from her foster family the first time, Hana had an image of him coming out of a truck to pick her up and apologizing for making her wait so long (though she dismissed it as a simple fantasy). Hana initially desired to meet him but later became rather cold towards him after finding out he didn't care about anything other than himself simply from clues about him, though she still left with him under Michiko's orders. Even after their short time living together and Hiroshi's resolve to make up for lost time, he ends up chasing after another woman and abandoning her before long. However, Hana remained unaffected by this, stating that her feelings were never really there in the first place.

Hana's relationship with Michiko was rather complicated at first, due to their clashing personalities. But in time the two drew closer to one-another in their adventures (Michiko dubs her with the name "Hatchin", due to the latter's contempt for her original name) and eventually formed a mother-daughter bond. When Michiko left Hana in Hiroshi's custody and declared that she was going to return to jail to serve out the rest of her sentence at the end of their journey, Hana was deeply saddened that they had to part ways. Years later, after receiving various gifts of lingerie for weeks, a determined Hana used a large map to pinpoint and travel to the location where Michiko would show up, the two were able to ultimately reunite while embracing one another.

At some point in her late teens, Hana becomes pregnant and ends up raising him as a happy single-mother. Hana loves her son very much although she admited that the child takes after "someone she knows" (possibly Michiko) due to his feistiness.

When traveling alone Hana meets a circus girl named Rita who develops a crush on Hana (believing her to be a boy). When Rita realizes Hana is a girl the two became close friends until they eventually separated.

Her relationship with the family can be best summed up as a Cinderella-lifestyle. She was constantly degraded by her adopted siblings, though she did eventually stand up to them, by throwing Gabriel off her back when Maria tries to steam-press her face with an iron, and by beating up Maria after all she was put through. Her foster parents weren't any better, as they only used her for childcare benefits, the father subtly manipulates her into believing that she was fortunate enough to live with his family and that he has saved her from a possible worse fate.

Michiko asked if she would go back to them if they didn't find Hiroshi in time, Hana flat out refused. In the epilogue she never sees or mentions them.

All in all, it was this reason that Hana dreams of someone rescuing her from the abuse.

Satoshi was a childhood friend of her biological father Hiroshi who, like Michiko and Hatchin, tried to find Hiroshi. Satoshi very rough and impatient with Hana to the point of kicking her when she irritated him while Hana often tried to avoid his presence (if given the chance) and doesn't approve of his actions. Satoshi later died protecting Hana from another criminal.

Hatchin was a nickname given to Hana after she stated she didn't like people calling her "Hana". Moments later as Hana is walking away after Michiko asked Hana to show her stomach to see the tattoo she was certain they both had, Michiko started calling out to her saying "Hey! Ha...chin!." Hana questions the "Chin" part but the nickname stayed. The meaning behind the name could be that Michiko tried to disguise calling out the name "Hana" by sneezing, or even the addition of the suffix "-chin", a more cutesy form of the suffix "-chan", generally used for little kids.

"From the other side of the road, someone will come and pick me up...there is no chance of that happening"

"Please don't hit me out of desperation!"

"That man brimming with hope, and a strong desire for a family, ended up up running off with another woman before long. Was i hurt, no..i don't think my feelings were ever there in the first place."

Hana cooking for her Foster Family

Hana with her foster siblings.

Hatchin working as a waitress in a chinese food store to pay for shoes Michiko stole. Episode 4 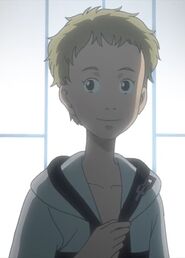 A teenaged Hatchin as she appears in the epilogue.

Hana playing with her son.
Add a photo to this gallery
Retrieved from "https://michikotohatchin.fandom.com/wiki/Hana_%22Hatchin%22_Morenos?oldid=6320"
Community content is available under CC-BY-SA unless otherwise noted.