Hiroshi is the former lover of Michiko Malandro from the past and the father of Hana "Hatchin" Morenos. Despite being officially considered dead after a bus explosion, Michiko believes that he is alive, and rescues Hatchin in order to find clues of his whereabouts. He too shares the same tattoo as both Michiko and Hatchin, except that his one is on his left shoulder.

Hiroshi's past (as well as the information about his family, except the surname Morenos) is largely unknown. From what could be implied, is that he grew up in a dangerous neighborhood.

Hiroshi first meets Michiko as a young man when he attempts to attack a boss leader's supposed hide out. Hiroshi and another member bust open the door with guns and masks on only to find a topless Michiko. Hiroshi, feeling bad, tells her to put on the shirt hanging on a line next to her but she says it's not dry. Hiroshi then takes off the mask, which is a sheet and throws it to her. Instead of putting it on, she walks over and headbutts him. The other man runs away due to the fact that their guns were not loaded. While Hiroshi is down, with his nose bleeding, she loads the gun he dropped, but she doesn't fire and instead wipes the blood off. This may be where they "fall in love".

Hiroshi first meets Satoshi as a child, which is shown in episode 10 (The Carnival of Hyenas). It shows a young Satoshi running through a small crowd of people at a market. He goes through an alley, and notices items being thrown out of a door and into a cart. Hiroshi then emerges from the door. A few minutes later, men with guns run through the alley looking for him, but is hidden in the cart of items. After Hiroshi saved him from possible death, they get drinks and Satoshi asks if he has any "hair" growing. He then talks about how they are adults and that he is going to have the head of Manabe and take over his group. He then asks Hiroshi if he will help him do that. Hiroshi agrees and Satoshi gives him his shoes and a gun saying "I am president and you are my partner."

Sometime later, Satoshi is captured, crying because he is facing the boss (Manabe) who says he will kill him if he doesn't make him laugh by the time he finishes smoking. At that time, Hiroshi is walking through a possible kitchen next door and is ready to throw out trash until he notices Satoshi in the next room. Satoshi is so scared that he urinates. The boss laughs saying "this isn't a washroom". He then says that he's lost, but asks for a knife to slice and dice with. Hiroshi then runs back to the kitchen, turns out the lights, runs back into the room, pulls out his gun, and fires.

Despite Hiroshi's affiliations, he eventually leaves his hometown and lives a nomadic lifestyle, performing various odd jobs, along with meeting various women (who seem to fancy him), he eventually becomes a father to Hana Morenos, though the young child ends up as an orphan, due to his absence and her mother being deceased. It's unclear if he was ever aware of Hana's existence.

It was later rumored that he died in a bus explosion, but Michiko believed otherwise, so she and Hana set out to look for him.

During the series, he is very elusive, often coming and going, with the duo either arrive too late or they find another person that resembles him.

In Episode 22, Michiko and Hana had finally caught up to him the former embraces him, while the latter wanted little to do with him. He travels with them to a house where an air-pilot lived, Michiko asked him to take both Hiroshi and Hana. During the final scene with Michiko, he agreed to take Hana under his wing, and waved goodbye as they departed. Sometime later, he still kept Hana in his custody and gives her a pass to cross the border, along with his seeming promise to make up for lost time. Though, he ultimately runs off with a new woman shortly after.

Satoshi Batista - The two have been friends since they were kids. Hiroshi supports Satoshi's attempt of overthrowing Manabe and take over the local gang, and has risked his life to save him on different occasions. Hiroshi eventually left his hometown and doesn't appear to have kept in contact with him nor is he interested in the latter's recent activities.

Michiko - Hiroshi had met Michiko in his young adulthood. The two got off on a rocky start, due to him and another member (with guns) busting in the boss leader's hideout where Michiko was staying and because of her being topless during his arrival. He apologizes and it seems that after the incident, the two have became lovers.

In the series, Hiroshi had became aware that Michiko had broken out of jail on TV. In the epilogue, he hugged Michiko and complimented on her hair being longer and had agreed to look after Hana, the two never met again afterwards.

Hana - While it's unclear if he was ever aware of the fact that he had a daughter, during Episode 22, he (through Michiko's insistence), tried to appeal to his estranged daughter Hana, but was given the cold treatment. There was a scene where he asks Hana what to call her by, only for the latter to respond "no please don't" in a cold fashion. He appears to keep his promise to Michiko by raising her before boarding the plane. Sometime later while still having Hana in his custody, although he gives her a passport to cross the border and promises to fill the 10-year void (making up for lost time), unfortunately this promise was soon broken when he ends up running off with a new woman. Hana, however, doesn't seem to be too much hurt by this, as she acknowledges that, apart from them being related, she doesn't feel any kind of real bond to him.

"Sorry to make you wait, Hana...I have come to pick you up."

"I can see it now, we'll fill the void, that great big ten year void" 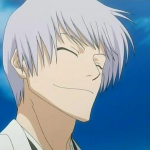 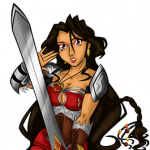