Pepe Lima was a young exotic dancer who performed at the Rumba dance hall. She targets Michiko Malandro and Hana "Hatchin" Morenos for their I.D.s so that she and her younger sister, LuLu can travel to São Paraíso and start a new life.

Pepe and Lulu were the daughters of a upper class couple and lived a life that Pepe described as "a fairytale" and the two sisters were treated "like princesses" until the girls' father died of unknown causes, which left her family in debt and nobody offered the grieving family any help.

Not long after, she was kicked out along with Lulu, possibly by their mother, and they had to move to the favela where Pepe became a professional exotic dancer at the nightclub "Rumba's" to support them both. Pepe dreamed of traveling to Sao Paraíso to create a better life for herself and her sister and in hopes of spitting all those who ever laughed at or looked down on her, especially her mafia "boyfriend", Rico. She was also physically abused by Rico and kept nearly all of her earnings for himself, leaving Pepe and Lulu to steal and dine-and-dash to survive.

After Michiko is kidnapped by forced to pay Rico for the trouble she caused him and a TV that someone else broke she meets Pepe again, who is with a man in a car. Pepe demands that he runs her over and tries to run her over herself, not knowing or caring that Hatchin was in harm's way and when they managed to get out of the way Pepe swore that she could kill Michiko for real if Pepe saw her again.

Later, Pepe and her little sister Lulu dine-and-dash at the restaurant where Hatchin was working after Pepe tells Hatchin she knew Hiroshi. Hatchin relays this information to Michiko and they head to Rumba's to talk to Pepe. After her performance, Pepe tells Michiko and Hatchin about her past and then challenges Michiko to a drinking contest, saying that if she loses, she'll tell Michiko what she knows. Michiko wins the contest, but Pepe is seemingly too drunk to tell her anything so an angry Michiko returns to her room where Lulu dashes out from under the bed, clutching Michiko's bag. She brings it back to Pepe's room but after searching it, regretfully tells her sister there are no I.D.'s in the bag.

Desperate for a way to get them both out and unable to afford more than one fake I.D. Pepe, with Lulu's help, robs her boss. The plan goes off without a hitch but Pepe forgets the picture she was going to use for Lulu's fake I.D. and throws a fit until Lulu goes back to get it and when she takes too long to return Pepe, worried that something happened to her sister, goes to Michiko for help and tries to beg, demand, blame and even threatens Michiko with ratting her out to the cops but Michiko stands her ground and brings up the fact that she too has a child to take care of and therefore cannot risk her own life over something that Pepe brought upon herself. Pepe finally stops and decides to surrender the money, possibly believing that Lulu was just captured and would get her back by returning the money to Rico (unaware that Rico ordered for both sisters to be killed and Lulu was most likely already dead by that point).

Pepe takes a taxi to Rico's place until it's path is blocked by three of Rico's children henchmen. The driver whispers something to Pepe, most likely asking her to get out of the car so he can escape. Realizing she can't escape her fate, Pepe gets out the taxi and solemnly walks up to the children with her head high. The boys shoot her before the scene goes black.

Pepe is a slim young woman with long blonde hair, blue eyes and tan skin. For work Pepe had to wear revealing outfits, jewelery, heavy makeup and acrylic nails. She and her sister Lulu sometimes wear matching outfits (with Lulu's being more childlike). 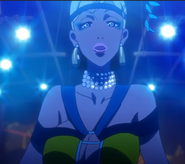 Pepe sitting with Michiko and Hana 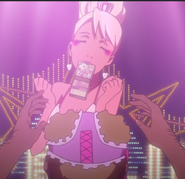 Pepe with her parents and sister in happier times

Pepe with her mother and sister at her father's funeral

Pepe and her sister are abandoned soon after their father's death